This semester’s featured artist: Jeff Shokler. Jeff is the Associate Director for Advising Technology and Assessment in the Office of Undergraduate Advising at UW-Madison.

Wonders of the Universe: The Astrophotography of Jeffrey E. Shokler 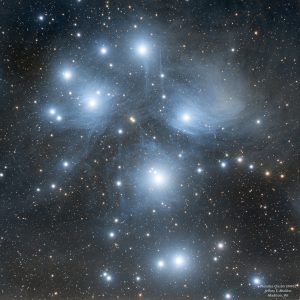 My astrophotography interests span a wide array of subjects including the moon, planets, sun, nebulae, globular clusters, galaxies, and more. When processing my images my aesthetic leans toward the “realistic” with the goal of bringing out both as much fine detail as possible and the natural colors of the objects that are often faint and very, very far away.

An observational astronomer for decades, I only recently began doing astrophotography in 2015. An astrophoto is the result of a long series of steps and processes involving a wide range of imaging equipment (telescopes and mounts), digital cameras (DSLRs and a dedicated astronomy camera called a CCD camera), computers (for data capture, camera control, data storage, and processing), and software for image calibration, processing, and post processing/finishing. With its steep learning curves, equipment demands, and complex processes, astrophotography is a true labor of love for me. An “outdoor nerd hobby” as I like to call it, amateur astronomy satisfies my strong sense of curiosity and desire to learn new things and engages my sense of awe and wonder about the universe, its complexity, and its beauty.

The objects I selected for this exhibition range in distance from hundreds of miles away (the International Space Station transiting the Moon) to millions of light years away (the Andromeda Galaxy). The most distant object I have knowingly imaged was a quasar (an active galactic nucleus) that lies some 11.3 billion light years away from us! 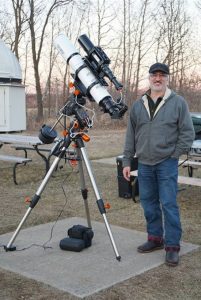 Jeff Shokler is the Associate Director for Advising Technology and Assessment in the Office of Undergraduate Advising, serving in this role since November of 2012. Previously, he worked for fifteen years in the L&S Honors Program – nine as its Associate Director. His educational background is in anthropology, archaeology, and geoscience from Southern Methodist University in Dallas, TX, and the University of Wisconsin-Madison.

A self-proclaimed “nerd,” Jeff has always had a great interest in science – particularly in astronomy. For a 4th grade class assignment he wrote a book on space (a book he still has…). In the late 70s and early 80s his astronomy interests led him to join the Texas Astronomical Society (TAS) in Dallas, TX, and eventually to acquiring his first telescope – a Coulter CT100 4 ¼” Newtonian reflector – courtesy of his very kind parents. The 1980 television series Cosmos, presented by astrophysicist Carl Sagan (who Jeff had the opportunity to meet in 1986), reinforced these early interests. By the age of 16, when given the opportunity by his father to go with him on a trip anywhere in the continental United States, Jeff chose to go to the Texas Star Party (a world-class gathering of amateur astronomers under the dark skies of southwest Texas) in Fort Davis, TX near McDonald Observatory. His curiosity, fascination with science, and drive to learn combined with these experiences led to a lifetime engagement with amateur astronomy.

Once in Madison, Jeff joined the Madison Astronomical Society (MAS) and served on its Board as President, Vice President, and Board Member-at-Large. Many of his deep sky astrophotos are taken at the society’s dark sky site, the Yanna Research Station, located 35 miles south of Madison. He enjoys doing science and astronomy outreach at events like “Moon Over Monona Terrace,” star parties at Devil’s Lake State Park and Donald Park; he also often gives public presentations about astronomy and astrophotography at MAS monthly meetings, photography groups, school science classes, and senior living communities.