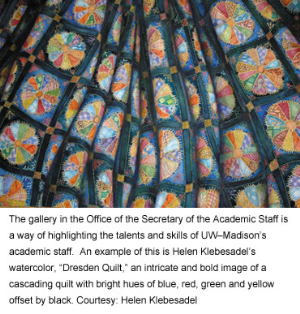 The Office of the Secretary of the Academic Staff is an unlikely place for an art gallery.

Helen Klebesadel, a watercolor artist and occasional UW—Madison lecturer, suggested that Donna Silver, who started as secretary of the academic staff last summer, create a home for original artwork in the office. The gallery is now prepared to display framed, ready-to-hang two-dimensional artwork created by UW—Madison academic staff on four of its walls.

“I encourage places with big spaces to use them as galleries,” says Klebesadel, whose watercolors, which blend themes of craft and nature, are on exhibit this semester. “The gallery gives people a reason to go in and walk around and walk through the door the first time.”

The gallery is another way of highlighting the talents and skills of UW—Madison’s academic staff, Silver says.

“When Helen first came to the office and shared her vision of transforming it into an art gallery, I was struck that this would be an ideal way to celebrate the multiple talents of the academic staff on this campus,” she says.

It’s also been a good way to engage people who come in to the office for other reasons but are struck by the vibrant colors and scenes in Klebesadel’s work, Silver adds.

“People stop in to drop off something and say, “Something is different!’” she says.

The door to the office in 270 Bascom Hall leads visitors right into Klebesadel’s “Dresden Quilt,” an intricate and bold image of a cascading quilt with bright hues of blue, red, green and yellow offset by black. Klebesadel says her technique requires that she paint each stitch by hand — twice — to portray the artistry that goes into quilting.

Her other works combine elements of nature — birds, fruit, flowers and trees — with such crafts as embroidery, crochet, quilting and lace making, which Klebesadel says she learned from her grandmother during her upbringing on a farm near Spring Green.

“They were all people who did art forms that were not considered art, they were considered crafts,” she says of artisans from the area. “Those paintings dwell on that theme.”

Her paintings call attention to the craft elements in her work. In “Transfiguration,” one of Klebesadel’s still-life paintings on display, a detailed lace tablecloth takes up most of the painting, while near the top, the stem of a pear in a glass dish burns softly like a candle.

“Usually with a still life you’d have a tablecloth as a background for all these objects and the most important thing in the painting is the object,” Klebesadel says. In “Transfiguration, “the tablecloth dominates the imagery and says, ‘Look at me.’”

This fall, oil paintings by Georgene Pomplun, event coordinator for the Office of the Chancellor, will color the walls.

Academic staff who would like their work considered for exhibition in the Office of the Secretary of the Academic Staff should contact the office at soas@soas.wisc.edu. The e-mail should include the artist’s contact information and position on campus, a short artistic statement describing the art and creative concerns, a works list, and between four and 10 images of the artwork.

More information about Klebesadel’s artwork is available at her Web site.