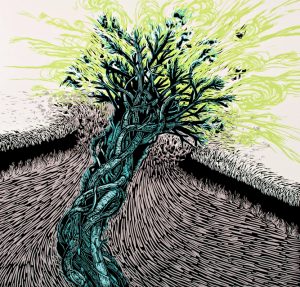 My recent work represents an exploration into the chaos and instability in Nature; sometimes hidden behind a façade of tranquility and order. The forces depicted may be as violent as an explosion or as subtle and unobtrusive as the growth of a virus or the quiet intrusion of an invasive species. I utilize natural forms (branches, rocks, roots, insects) as metaphorical imagery and I’ve tried to evoke in the subject of the prints the randomness and unpredictability of the natural interactions they represent.  While not readily apparent in the imagery, an underlying concept in these prints is the struggle to harness and control the forces represented and the ultimate futility of this effort. The work also references, in a subtle way, my interest in Chaos Theory and the study of random, nonlinear phenomena.

After focusing primarily on drawing and other print media for many years, I migrated to linoleum block relief printing as the most appropriate media for expressing my ideas. I prefer the dramatic, harder-edged effects that can be achieved by printing from a cut block versus the more subtle effects of pencil or paint. Cutting also leads to some interesting surprises in how parts of a block may print relative to how a particular cut was intended. Prints often evolve in unexpected directions as the cutting and proofing of the blocks proceed. My approach has been to start with a very quick and loose concept sketch to establish the basic idea and movement that I want within a particular piece. Then I refine, re-work, and enlarge this sketch progressively until I feel the drawing is ready to transfer to the block of linoleum. The level of detail in the transfer drawing varies from piece to piece. Sometimes I work out most of the detail in the drawing; other times I allow for more creativity while cutting the block. I tend to let the particular idea guide me in my approach though I have admittedly experienced success and frustration with both methods. I am also aware that the degree to which I work out details prior to cutting directly impacts how long a particular print will take to complete, regardless of the size dimensions. After I am satisfied with the black image as a finished piece in itself, I produce the color blocks and I prefer to cut separate blocks for each color as opposed to doing reduction prints. This allows me the flexibility to experiment with alternate color combinations within the parameters of a single idea.

Terry Emmrich was born in Madison, Wisconsin and grew up in Neenah after his family moved there in the late 50’s.  He developed an affinity for art at an early age and pursued this interest through high school and college. After graduating from the University of Wisconsin-Oshkosh in 1981 with a Bachelor of Fine Arts degree in drawing and printmaking, he moved back to Madison to work in the commercial printing industry. It was shortly after arriving in Madison that he began an affiliation with Andy Balkin and AGB Graphics Studio. The equipment and facilities at AGB allowed him to continue with the linoleum block printing that had become his medium of choice in college. In 2008 he was fortunate to be able to purchase a printing press for his home, a purchase that also coincided with a shift in imagery from what had been primarily figurative subject matter toward the natural forms that comprise his most recent work.

For the past 28 years, Terry has been the production manager at The University of Wisconsin Press. He lives in Madison with his wife Karen.