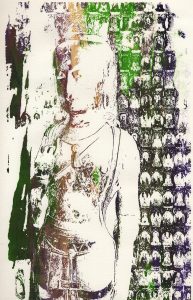 Often I want my work to be a spontaneous explosion of a million megaton bomb splattering subliminal colors into the viewer’s mind. Art to me is an experiment of ideas and the emotions of color. The silkscreen technique allows me to explore these ideas, whether it is to create a cozy warm feeling of peacefulness or a vibrant rock and roll vibe of a death metal punk band run amuck.

Having first started silkscreen printing through the UW-Madison Continuing Studies Program (February 2015), I found the medium so thoroughly enticing that I have continued taking the class 5 more times, which obviously points to my desire to experiment with ideas and colors while avoiding acquiring the skills to paint or draw. Due to the limited schedule of 3 hours of classroom time to print in the studio, I developed some high-throughput strategies to print as effectively as possible often working on 3-4 images at a time using up to 7-8 different screens. Usually when I am printing it is a workout, but in the end it is worth the effort when people enjoy my work on their walls.

I grew up on the shores of Lake Minnetonka, the 110 mile shoreline of the glacial lake 15 miles west of Minneapolis, Minnesota. From the ages of 8 to 10 I was exposed to many foreign cultures due to my family being relocated to Northern Italy for my Father’s job. While in Italy I attended The American School of Milan which allowed me to study at my own pace. Once I returned to Minnesota, I had a difficult time adjusting to the rigid teaching methods of “Do What I Say and Stop There Until Tomorrow” rather than the “Learn at Your Pace” method I enjoyed.

It was not until I bought my first electric guitar in 1981 and formed my first Punk Rock band in 1982 did I feel I could be free to pursue what I wanted to do. My career as a Punk Rock musician in Minneapolis was never going to pay the bills, but it was a great musical experiment. I helped form many not-so-famous bands such as The Thalidomide Kids and The Million Megaton Explosion from the early 1980’s to the late 1980’s.

I attended The University of Minnesota and majored in Genetics and Cell Biology in an effort to pursue a dream of understanding and manipulating life on the molecular level. It was not until 1988 that I was accepted into the Biochemistry Laboratory of Dr. John Lipscomb as a Lab Technician. By 1990 I had my undergraduate degree, but I found my passion once I had crystallized my first protein called Methane monooxygenase  from methanotrophic bacteria which are found in freshwater lakes at the point wear oxygen is depleted which convert methane to methanol. By 1992 I was invited to join The Department of Biochemistry at the University of Minnesota to get my PhD, but bypassed that option in my career to follow my love, Dr. Que Lan, who had accepted a Post-doctorate fellowship in Seattle, Washington. Within 2 days of looking for a job as a protein crystallographer, I was hired at Fred Hutchinson Cancer Research Center where I worked with Dr. Barry Stoddard.

While in Seattle for almost 6 years, my first child (Crystal) was born, and soon after, my wife earned her first faculty job at The University of Northern Iowa, Cedar Falls, Iowa. We relocated to Iowa and I joined the program of Environmental Science to earn my Masters Degree. Almost to the day we arrived in Iowa, we left 2 years later when my wife achieved her next faculty job at University of Wisconsin, Madison in The Department of Entomology. I was hired immediately at the University of Wisconsin Madison by Dr. Paul Ludden in the Department of Biochemistry. 5 months after we moved to Madison in 2000, my second child (Hunter) was born.

My children and family came before my music and art for many years.

After Dr. Paul Ludden left The Department of Biochemistry I worked for Dr. Ivan Rayment in the same department until funding ran out, then joined Dr. Katrina Forest’s laboratory in the Bacteriology Department, still pursuing Protein Crystallography. For 6 years I was fortunate to be able to also work half-time with my wife Dr. Que Lan where we were able to publish 5 scientific papers together.

In 2008 our family opted to live in Wuhan, China (a city of 11 million people ~425 miles up The Yangtze River from Shanghai) for 6 months during my wife’s sabbatical. Dr. Que Lan and I worked as a scientific team at Central China Normal University doing Entomology (insect) research that could benefit farmers worldwide, as well as teaching University students. We were able to often visit Lan’s parents who have lived in Wuhan over 50 years. I consider myself very fortunate to have visited The People’s Republic of China 10 times since 1992 and feel sometimes that I am half Chinese although I do not speak the language well, yet know the basic customs.

By the time of our 20th wedding anniversary on Kauai, Hawaii, Que Lan and I thought everything was great. We were a team following our scientific passions, plus we were very pleased with how our children were maturing. Everything ended abruptly once were returned from Kauai when it was discovered Que Lan had stomach cancer. The life I had built with her for 24 years ended 6 weeks later when she passed away due to a severe reaction to the chemotherapy drugs. There were no words that could comfort me, and I found it strange how the world did not stop moving, because for me it did.

A year late my wife’s Mother emailed me from China telling me I should find a “wife or a girly-friend” which was very thoughtful of her. As I became to understand the terms of “Grief”,”Loss”, and “New Normal” life has improved. My outlook, as it was before, is of a positive nature. The glass is still more than half full.